Nustar Energy, located in Point Tupper, Nova Scotia, presented a cheque Friday for $110,000 to support children with critical illness and cancer patients in Cape Breton. For a third year in a row NuStar Energy has raised money for Caleb’s Courage and the Cape Breton Cancer Patient Care Fund through the Fairways to Success Golf Tournament. Golfers from all over North America came to Dundee in August for an event that saw $110,000 raised to support cancer patients and children facing critical illness. 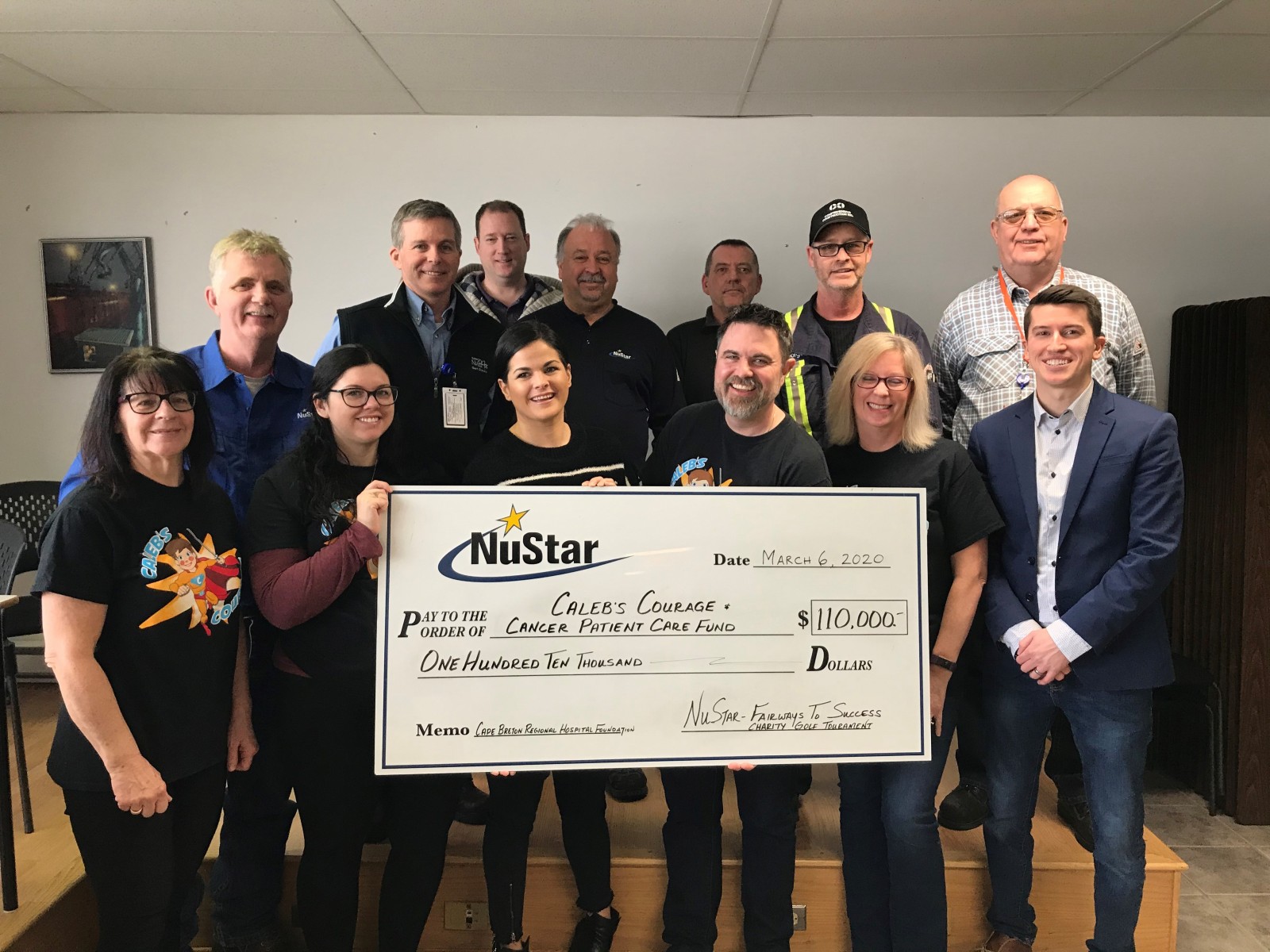 “Our family is grateful to NuStar for the significant time, effort, and money they put into this incredible event each year,” said Mike MacArthur, Caleb’s father. “They truly appreciate the impact of their contributions for critically ill children in Cape Breton. We are proud to have them as part of our Caleb’s Courage team.”

Caleb’s Courage was created with love by Caleb’s parents as a way to honour their son, and, with the help of the Cape Breton Regional Hospital Foundation, to make a positive impact in healthcare for families all over Cape Breton Island. “Helping Little Superheroes Fighting BIG Battles” is their mission and their mandate is to provide support for critically ill children & their families by enhancing the services, programs, and facilities for Pediatric Palliative Care & Oncology in Cape Breton.

In the past three years, NuStar energy has raised $345,000 for children with critical illnesses and cancer patients facing financial struggles as a result of their diagnosis. In addition, Nustar Energy sponsored the Because You Care Cup Road Hockey 2018 tournament and in 2015, they generously donated $20,000 to support the purchase of a new linear accelerator for the Cape Breton Cancer Centre.

“At NuStar, the healthcare of our community is very important. The Cancer Patient Care Fund and Caleb’s Courage are causes that touch just about everybody in Cape Breton,” said NuStar representative, Chelsey MacEachern. “Our employees give back their time and resources to countless worthy causes and giving back means the world to us. Our employees make the decision to give back, knowing that it could be them in need of the support someday.”

In addition to Caleb’s Courage, half the funds were directed to the Cancer Patient Care Fund. This fund exists to help cancer patients at the most fragile time in their lives. Since its inception in 2005, more than $2,500,000 has gone back to cancer patients who struggle paying bills, affording medication, traveling for appointments and other daily necessities. In 2019 alone, more than $475,000 was disbursed back to patients in need.

“The Cancer Patient Care Fund is 100 per cent donor funded,” explained Cape Breton Regional Hospital Foundation acting CEO, Rick McCarthy. “This support from community groups and businesses like NuStar gives patients an opportunity to focus on wellness instead of their finances. On behalf of the patients who are fighting this battle, we are truly grateful for their dedication to health care in Cape Breton.”

Danielle MacKinnon-Allen, who is living with a cancerous brain tumor, visited the golfers on the course while they played. It was important for them to see exactly who they are helping with their generosity. “I’m living with a brain tumor, but I’m fighting,” said MacKinnon. “NuStar and their guests were amazing and their giving spirit was felt all across the golf course.”

Known for its special caring and sharing culture, NuStar has been ranked as one of FORTUNE’s “100 Best Companies to Work For” for a number of years, recognized with many national safety awards, and lauded for its tremendous commitment to community service.

Since 1990, the Cape Breton Regional Hospital Foundation, in partnership with the community has raised more than $55 million to purchase equipment, and fund upgrades at the Regional Hospital. This has reduced wait times and provided an increased menu of services – closer to home. The Foundation has recently been accredited under Imagine Canada’s national Standards Program, which promotes transparency of charities and nonprofits, and strengthens public confidence in organizations and the sector as a whole.

This is not a valid email address.